Estepa – the Sweet Capital of Europe

The following guest post was contributed by Samuel Bartlett.

High in the hills of Andalusia and close to Seville nestles the Spanish town of Estepa – a typically rural town of just 12,000 people.
Throughout the year, the surrounding area is filled with the sweet, heavenly scent of sugar, almonds and cinnamon, as the industrious inhabitants produce some of Spain’s favorite cookies. Mantecados and polvorones came into existence as a traditional part of a Spanish Christmas, but now the year-round demand for these local delicacies mean that Spanish shops and supermarkets are constantly filled with these brightly wrapped delicious cookies.

Mantecados are small, round cookie/cakes, with a high fat content that makes them very light and crumbly – and they simply melt in your mouth. They can be flavored with cinnamon, lemon, or cocoa, and American readers may know them as Italian wedding cakes. Polvorones are a type of rich almond shortbread cookie and they take their name from the “polvo” (powdered sugar) in which they are dusted.

Tradition has it that in the 16th century, surplus supplies of flour and lard led villagers to utilize these commodities with the intention of making a profit. However, it was only in 1870 that these were produced commercially and their success was instant. Today there are about 30 small factories, employing more than 2000 people in manufacturing the cookies. Most of the rest of the population are involved in marketing, equipping, distribution and transport. 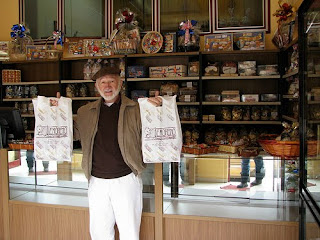 A much older tradition suggests that, at a time when the Moors were being driven out of Spain, it was an expression of the Christian faith to eat these cookies publicly, as neither Muslims nor Jews would eat them because the fat they contained was manteca de cerdo literally the fat of pig. Nowadays, mantecados and polvorones can be made using vegetable shortening, which will produce equally good results, and enable vegetarians and those of every faith to enjoy them.

By-line:
Samuel Bartlett writes for bachelor degree online and can be reached at bartlett.samuels (at) gmail.com

* If you are interested in writing for Sweets Foods Blog, check out the Guest Post Guidelines here.

Subscribe in a RSS reader or get updates by Email!