Empanada Recipes, How to Make Empanadas of Argentina, Mexican, Colombian style and Many More

What is an empanada? Fried or baked empanadas? How is the exact name: empanadas, empandas, enpanadas empenadas, empinadas, empanaditas or empanadillas? Savory or sweet fillings? There are so many questions, with several answers.

Let’s tackle with the name: Empanada

Empanada is a Spanish term that doesn’t have a translation to English language, this is why you can find different spelled and misspelled names. Empanaditas or empanadillas are small empanadas usually, eaten as snack, and the ending “…itas” or “..illas” means small-mini, very common terms in Spanish language (Español)

What is an Empanada?

Empanadas came out of the Spanish verb “empanar”, in other words to coat or wrap in bread. They are done with pastry dough (often also with phyllo dough) and the filling can be your total creativity inside the kitchen.
The most popular are with beef, chicken, seafood, cheese, vegetables, spicy, pumpkin, apple and all have different sauces inside as well as shapes. Folding dough around your stuffing and sealing it, presto, you get an empanada!

The empanada-history is apparently from Spain, and a different version of Portugal, but it seems that, obviously, folded dough and yummy stuffing appeared in numerous parts of the world. We have the famous Indian samosas or the Italian calzone and many more, to name only a few.
Where the Spanish people were, they appeared empanadas, spreading in all Latin America, Caribbean countries and the Philippines.

More common shapes are circular and half-moon or semi-circular. When you’ve dozens and assorted empanada fillings on your table, it is important to have very clear the shapes and/or individual marks on each, to distinguish the diverse fillings. It isn’t the first time, that you begin eating an empanada thinking on a specific taste and the result is completely different after the first bite.

Tough question, fried are crispier than baked ones, and often baked empanadas can take longer to be done, but they are healthier. I think that every now and then, a fried empanada is good for your palate but in my case, as a general rule, is a baked one.

Savory wins so far in proportions but, as you guess, the sweet ones are for my liking too. Frequently sweet empanadas (empanadas dulces) in my country Uruguay are with dulce de leche or cajeta, with chocolate, ricotta with raisins and streusel style (apple empanadas); usually you can sprinkle powder sugar on top to differentiate them of the savory ones. Empanadas can match perfectly with red wines and sweet white wines.

I’ve made lot of batches of empanadas recently. When you begin, you can make different fillings and even store them in the freezer for future dinners. Afterwards, you need only to defrost and later bake or fry them, according to your taste. 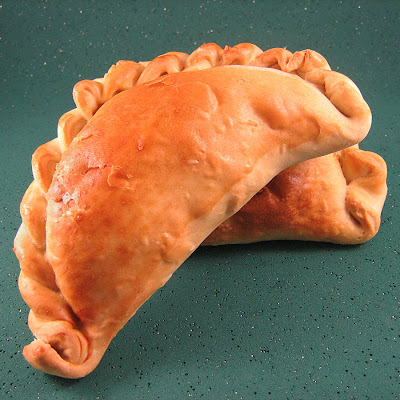 In my pantry now, I’ve beef empanadas (empanadas de carne) here called “empanadas Criollas”, empanadas Argentinas-style like Mendocinas, Salteñas (also there are Salteñas from Bolivia), and the popular empanadas Chilenas too. As I explained in my article about Uruguay, Anthony Bourdain and beef, here the beef is the King and Queen. Anyway, pss vegetarians (there are here wonderful veggie empanadas too, totally meatless)
As it’s a typical Spanish custom imported into Latin America, I’m putting the names in Spanish language too (Español)

There are endless variants, sauces and mix of ingredients for them that you can imagine.
Of course, there are industrial empanadas, done with a machine, but nothing compares to homemade ones, warm just took out of the oven.

Are there Uruguayan Empanadas?

As most of the people came from Spain (principally from Galicia) and Italy, they took empanadas with their culinary traditions. Usually, the empanada dough is with wheat flour and in lesser cases, of corn flour dough.
The empanadas of Uruguay are similar to the Argentine empanadas and you can find them everywhere.

Are there gourmet empanadas? Certainly, there are “empanadas gourmet” with highly sophisticated fillings that deserve this title and they can be so addictive, indeed.
The empanadas together with the alfajores with dulce de leche, milanesas a la napolitana, faina and Uruguayan chivitos are some of the snacks-dishes very popular in Uruguay.

Want to know how to make empanadas from scratch? Also, would you like to know, how to make fantastic empanada fillings, in an easy way with delicious recipes?
I’m sharing below lot of empanada recipes (recetas de empanadas) for your delight.

* Empanadas Mendocinas for Empanada of the Month

* So Many Ways to Fill It

Which is your favorite filling? Are you with the healthier baked or the fried ones? Tell me, your tasty experiences in comments.

Subscribe in a RSS reader or get updates by Email!

Totally, thanks Ryan! The empanadas realm is vast and the limit is only the creativity of each of us 🙂

I can't believe it 😉 Always there is a first time!

Comfort food and handy when you're in a hurry!

I'm with you Soma! I'm sure that the Indian Gujiyas are luscious also.

Love all empanadas baked and fried. I was surprised to see the origin was Spain (I thought Argentina) since I've never seen the hand-held variety in Spain, only large pies that are cut in pieces like Empanada Gallega.

Gera, thank you for sharing all these information. I've only tried the Philippine empanada and it is really good. When we used to have a shop, my mom used to make this. Oooh memories.

Oh my – I love empanadas – there was a shop in Washington, DC that sold them and I always loved to grab one and eat it as I walked around. They're not so common here. So I will have to make my own.

hehe you know I don't think I've ever met anyone that doesn't love empanadas! 😀 They look fabulous Gera!

I am a huge empanada fan! I love all the variations you have here, Gera! Nice to see my empanadas here 🙂 Great post!
My recent post Poached Eggs with Asparagus and Mustard Sauce

empanadas are my favorites and I love that you can use whatever filling you desire, excellent post Gera!

WE love empanadas too Gera and we have nice recipes in my blog I have too some recipes, oven and fry, I love seafood oven empanadas, are fantastic with shrimp, huggs. gloria

I like them roasted in my Big Green Egg. I'm about to make some this weekend using some pulled pork (no sauce, just the bbq'd meat) as the base with some other ingredients.

Oh my, I didn't even know there is the sweet version of empanada. Thank you for this info Gera. Now, let me check the recipes.

My fridge just happens to be full of empanadas right this moment. From a new company that just went into business in California. Started by a guy who grew up in Puerto Rico. They're awesome tasting, too.
My recent post Betelnut — An Oldie But Goodie That Tantalizes and Surprises

This is fantastic, Gera! I have never made traditional empanadas and am very excited to try.

I appreciate the background information.

You’re welcome! I know that Salta is in Argentina, btw lovely place! But there are Salteñas also in Bolivia, they call them in that way… 😉

I’ve had a pumpkin empanada from Luna’s Bakery II in Detroit, MI, that tastes absolutely wonderful, but is unlike any other kinds of sweet empanadas that can be found outside of the Detroit, MI, area. The dough is the big difference… it is not a pastry dough like I’ve found in so many recipes online… it’s more like a very soft bread… kind of like a soft dinner roll or cinnamon roll, but w/o being super sweet… the filling provides the sweetness and the dough is a slightly chewy but soft wrapper. They are baked, and probably are brushed with a mixture of milk & cream before baking. There is definitely some coarse ground cinnamon in the dough itself, too. I’m also pretty certain that the dough doesn’t have any lard or vegetable shortening in it… it’s not at all like the pie crust pastry dough that I’ve found in 100’s of empanada recipes so far.

Do you know of any recipes for sweet empanadas that have a dough like this? If so… please post back and let me know where to look. It’s been frustrating trying to make this dough just by dabbling around in the kitchen and not having at least some kind of base recipe to work from.

I have never eaten an empanada before but from the discription above I would like to try some. I am not in for fried things but will try and see which tastes better baked or fried. thanks for sharing.