Love savory crispy textures? If I add that it’s gluten-free and vegan, I bet that the answer is a yes!
It has several names but the result is only one: your total satisfaction near to the addiction: the Farinata.

The version coming from the Italian cuisine, is the Farinata, principally a Ligurian dish.

On the French side is the Socca, like a thin pancake, and as in Italy, has the same basic ingredients chickpea flour and olive oil. It’s served as a snack street food when you’re in these hectic days and craving something delicious, golden-crunchy and cheap! 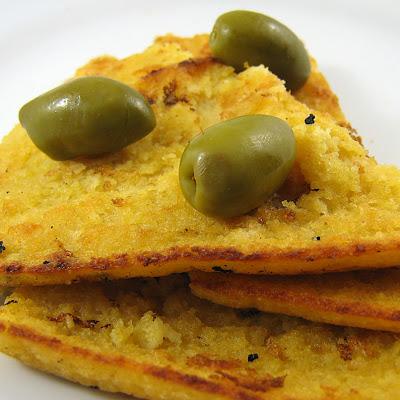 The faina turned out golden and I added as garnish, some olives for the picture…as you guess the faina vanished quickly!

In my country Uruguay and in Argentina, with an enormous Italian immigration, came the farinata but derived its name in “faina“.
Faina is also made chickpea flour and it’s a flatbread. It’s impossible to not serve with enough black pepper, as a crunchy-nutty appetizer, depending if you want from the border (thinner and crispier) or of the middle (thicker and less crisp but more intense savor of the garbanzo).

Chickpeas are a versatile culinary product, with high proportion of proteins and carbohydrates, repeatedly found in the Indian cuisine and Middle East cuisines as well. You can describe the faina similar to a “hummus” but in a thin bread style.

A tradition here is to eat pizza a caballo (“a caballo” means “on horseback”) and it consists of a slice of pizza topped with a slice of faina, an especial warm-savory sandwich, so yummy. This invention, as I know, isn’t a common practice in Italy, only in the Rio de la Plata (Uruguay and Argentina).

The Faina is easy to do and has the combination of chickpea flour, olive oil, water, baked it in a very hot oven and seasoned with black pepper more herbs.
Variants of the same, you can add to the batter alternatively chopped onions, a soft garlic nuance, red peppers, parmesan cheese….or better, all together. 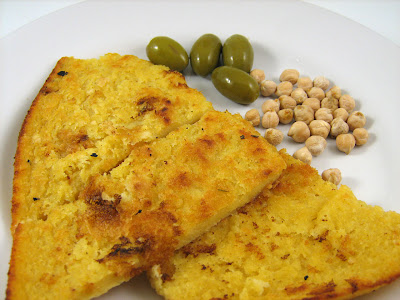 I know that you want recipes, then I’ve gathered fantastic Farinata recipes for your joy!

As vegan & gluten-free friendly, is perfect for every occasion that you need a quick appetizer!
Have you tried faina, socca or farinata or the “name” you want? Do you’ve a magical faina recipe to share?

oh my goodness, this looks so good. I cannot wait to get some chickpea flour to give it a try, and the links to all the recipes – pure genius.

Actually the original name is "fainâ" in the Genoese dialect. It was then translated in Italian as "Farinata", but the scores of Genoese immigrants in South America kept the original name for the dish of their tradition.
Alex from Genoa

I had socca when I was in the south of France and loved it. It seems simple enough to make so I don’t know why I haven’t done so yet, but your sure give me enough links to check out – thanks!

P.S. Oh, and about that faina-pizza sandwich, WICKED!

It’s simple full of flavor (you can do it with onions or cheese added), golden and crispy. Need more?
And try pizza a caballo (faina on top – a staple here) is crazy 🙂