Quinoa & Amaranth Grains – What They Have in Common with Le Cordon Bleu and NASA?

Recently dining out at a nice restaurant celebrating the end of the year, I was lucky enough to eat a delicious dessert with red quinoa and amaranth – I was fascinated again because I tested these grains so many times. As a foodie I love to know more about what I eat…I knew that the quinoa and amaranth are gluten free products (ideal for gluten intolerance) and nutritionally speaking are amazing …but there’s much more with these super cereals!

Quinoa and amaranth are used in flours, breads, pastas, desserts and you can fly with your imagination in other uses;) By the way, I’m going to give you in this post some cooking tips and recipes, I know that you – foodie like this type of delicious stuff. 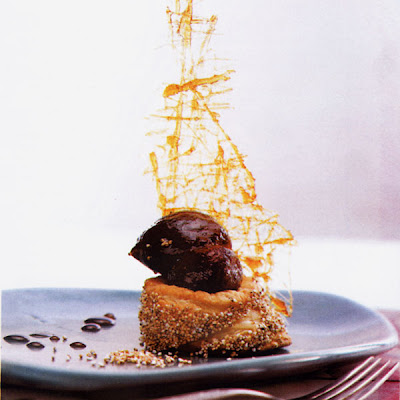 A Bit of History and Their Origins

Quinoa grain dates back over 5000 years especially in Andean areas in South America, which are now territories of Peru and Bolivia. The people considered it sacred and used in religious rituals.

It grows wild in the Andes at high elevations between 3000 and 4000 meters (10000 to 13000ft approx).
The Incas even called it the “mother grain” (not for less) for its importance of growing up in extreme conditions – a true gift from the gods!

Amaranth (Amaranto in Spanish) they’re a generic world type of plants but I’ll refer only to amaranth grain. They’re very old, thousands of years and were used by the Aztecs for their rituals. The grains were crushed, mixed with honey and shaped to a form of gods, for use in religious ceremonies. Today is mainly found in small quantity in Mexico, Guatemala and Peru.

What is Quinoa or the Amaranth nutritionally?

You’ll still asking, which is the relationship with NASA and Le Cordon Bleu? I assure you a lot.

In the new gastronomic trends, install amaranth and quinoa grains in a place of privilege.
The top culinary art school Le Cordon Bleu published a book and was awarded with the third prize of the “French Cuisine” category, of a world competition organized at London on April 2008.

The book “The New Cuisine from the Andes: Quinoa, Heritage of the Incas” (Spanish “Cocina Novoandina: Quinua, Herencia de los Incas”) is a brilliant cookbook that include garden-gourmet quinoa recipes like salads, soups, starters, desserts (mine)! and beverages produced with these grains. This book is part of a project for the promotion of organic quinoa of Peru and the large increase in the demand at the gastronomic area.

NASA and the Space Voyages!

I’m big fan of Star Trek and science-fiction movies but this is for real: NASA has selected and is working with quinoa and amaranth such as crops CELSS (Controlled Ecological Life Support System)… are excellent plants for removing carbon dioxide providing oxygen and keeping down the need of external oxygen supplies, besides they’re immensely nutritious meals – just right for astronauts. So worth a try! 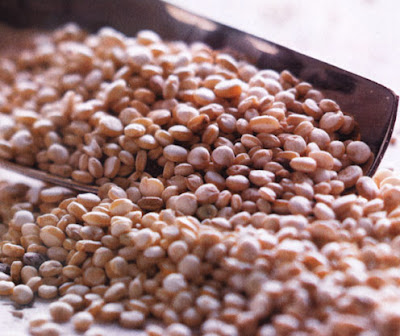 How to Cook Quinoa and Amaranth – Some Tips:

I was looking for some recipes for you to enjoy:

I’d like to know your experience, recipes and tastes about these awesome grains.
Well, the word is yours in the comments area 🙂

A Sandwich or Hamburger Recipe? None – a Delicious Uruguayan Chivito!

Which Are Your Worst Temptations?

The Power of Dulce de Leche – Indulge Yourself with This Sweet Delight!

Hi Gera! I have not tried either of these grains. I have been seeing quinoa on a lot of blogs with some delicious preparations. My resolution is to try some new foods, quinoa is on my list! Thanks for all the interesting facts, as always!!

Gera-Thanks for reminding everyone of us about these important and delicious foods. I love them both!! Amaranth is also easy to grow and a beautiful plant with lovely flowers as well as food source. Sister Javamanjoe

Incredible post! Thank you for bringing it to my attention.
This was definitely brain food.

I’ve cooked quinoa in my ricecooker. It’s so easy that way. Just push the button and — “ding,” it’s done in no time.

I love quinoa! And I especially love it as a breakfast cereal! What a great post, Gera.

what an exciting post Gera! I love both grains and often incorporate them in my breakfast or meals! Lovely!

I’ve never had quinoa before and I didnt realise it has that many uses, that co2 absoprtion ability of quinoa is an intriguing one – not only is it healthy, it can potentially save the planet!

Thanks for the interesting info! What wonderful grains!

Cheers and thanks for passing by!

Hi Gera,
I’ve not tried both grains before but they sure do sound nutritious. Thanks for the great info!
~Foong~

@Reeni♥
Actually they’re becoming popular recently but the nutritional properties are fantastic. Great resolution to experiment new flavors and foods..I try to the same when I can! Thanks so much Reeni! 🙂

@’Sister’
You’re welcome Janet! They’re wonderful plants and the Amaranth, yes has good looking flowers apart from the grains. I tried to be concise and only refer to food-side..Thank you Javamanjoe! 🙂

@[email protected]
Glad you like it! Certainly brain and soul food 😉 I expect you’ll can get and explore them!
Thanks for stopping by!! 🙂

@Carolyn Jung
Yes I think is the easiest way to do it. Cook must be fun, easy and in the less time possible. Happy to see you Carolyn! 🙂

@5 Star Foodie
I do believe a true coincidence, it’s a nice name because represents health and beauty!! Hope you enjoy the recipes! Thank you for the visit! 🙂

@Averagebetty
Wow Fabulous you like quinoa..for a healthy breakfast is so perfect! Do try amaranth is outstanding too! Thank you for coming by! 🙂

@MeetaK
Thanks a bunch! I know I know!! you love them I enjoy a lot both in your recipes!! Big *Hugs* Meeta! 🙂

@Kang at LE
So bizarre that these type of “old” grains are top notch in high techs environment…NASA, they’re plants perfect for the space and feed wonderful..Thanks so much Kang! 🙂

@Rosa’s Yummy Yums
Rosa you’re always welcome! Happy that you enjoyed this post!. Cheers and Thanks a lot! 😉

@The Food Site
Like your recipes these grains are stunning!! if you can, try to test them! Foong Thanks a bunch for your visit! 🙂

Great read Gera! I got a packet of fair Trade Quinoa for Christmas and I can’t wait to try it. I’d love the recipe for the first dish pictured, it looks amazing!

I’ve only recently discovered quinoa and am quite a fan!
I have yet to try amaranth…never heard of it actually 🙂

I’ve been using quinoa for a while and love it, but I haven’t tried amaranth yet. You’ve written a great rundown on both. Thanks!

Yes, I have been cooking with both of these grains. I even plant my own amaranth. Unfortunately, was too overwhelm about harvesting them. I always end up buying them at the grocery store. I like to maka tabouleh with quinoa. And amaranth, I can make porridge for breakfast. And In Indonesia, the green amaranth with stripy red vine on their leafs (bayam) is very popular vegetable. And it is highly nutritious as well.
Cheers,
Elra

@[email protected]
Try it in your excellent recipes!! About the yummy dessert I haven’t the recipe only the photo taken in the restaurant but is a baked basket with peaches in a strong syrup decorated with amaranth pop and caramel!
Greetings to you and have a Happy summer there!

@Olga
Both are great to try in recipes and the amaranth…you can do pop amaranth instead of the common popcorn 😉 a nice variation!
Thanks so much Olga! 🙂

@Marc @ NoRecipes
Quinoa is more common than amaranth in general ..you’ll love amaranth too. They’re interesting grains to add to tasty dishes.
Thanks a lot Marc! 🙂

@Elra
It isn’t easy to be a farmer and put the attention that the plants deserve! I ate maka tabouleh but not with quinoa.. good idea 🙂 so useful information about these vegs if you have some recipe please let me know Elra 😉
Thanks for stopping by and Cheers! 🙂

I haven’t had much experience with amaranth, but I have baked with quinoa and cooked with it too.

I often make it hot for breakfast for my hubby with a little honey and milk.

Also, you could check out my recipe for Mango Masala Chai Quinoa Muffins: http://CookingWithKimberly.com/?p=361

I’m a big fan of quinoa — can’t beat it for protein! But, I’ve not done quite as much with amaranth. Definitely on my list of things to try more of in 2009!

Nice info on these grains. I have so many recipes that I want to try that use these, especially quinoa. Hope to post more about it soon.

I’ve been having quinoa lately, which is a good alternative to barley or couscous or rice. The first time I tried it, I wasn’t so keen, but am quite partial to it now. Best of all, it’s very good for you!

@Kimberly @ the How to Cook Blog
Great you’ve had “appetizing meetings” with quinoa. The recipe of muffins is so special bookmarked for later!
In that way, for breakfast is completely healthy and yummy too 🙂
Thanks for coming by Kimberly! 🙂

@Lo
The proteins of these cereals are impossible to overcome! If you try amaranth, let me know the result, for sure it’ll be stunning!
Thanks a lot Lo! 🙂

@Jude
With the total availability of recipes it’s hard to try a big part of them but I do know I’ll see a quinoa recipe from you soon !
Thanks a bunch Jude! 🙂

@Helen Yuet Ling Pang
When you like to break new boundaries quinoa comes as replacement of the mentioned cereals and the better part, your body will welcome!
Glad for your visit Helen, thanks so much! 🙂

Hi Gera ~ hope you’ve been well. thanx for posting about these grains….appreciate your insight + bit of history about them! I have had both quinoa + amaranth but don’t cook with them often. but funny you should mention because I have had quinoa in mind for a dish to prepare. thnx for heads up about rinsing it well to wash out the preliminary taste of the shell!

@Taste Memory
Hope you’re well too!! Great you like them…I’d love to see your recipes as well 😉
For sure will be awesome as usual!!
Ingar, Have a Super Weekend 🙂

Take a peek at my Quinoa Chili:
http://savorthethyme.blogspot.com/2009/01/quinoa-chili_13.html

Beautifully written & a lot of information. I have not had amaranth yet, but eager to try since I read the "pop" sounds really interesting & fun:-) We are in love with quinoa & the possibilities are just endless.

In Spain Quinoa and Amarant are really unfrequent grains. I never saw or even cooked them.
I have read that when spaniards conquered América they burnt every crop of these grains, as they were considered food for wild people, and they forbided them. We also have an expresion in our language that I cannot translate: ¡Me importa un bledo! reflects the contempt(desprecio) to the amarant grain.
A “bledo” is an edible plant, and also something insignificant and worthless.
Really interesting post!
The spaniards really seemed to be the only wild ones!